Salt and Sugar: Our Worst Enemies is available on Selz 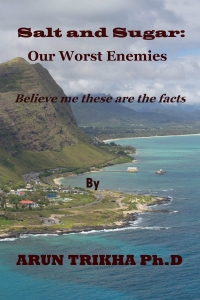 Seven of my close family members- father, mother, sister, three brothers and my wife’s father died in their 50-60 years’ age due to diabetes and high blood pressure. The most important reason for their early death was lack of awareness and education about health. All of them had university education but the diabetes numbers, systolic and diastolic blood pressure readings were, though known , but rarely monitored. They were so ignorant about physical activity, healthy diet, fruits, vegetables and low- carb diets etc that I was surprised most of the times. I am talking of those old times (5-6 decades) ago when education and awareness in medical field was not so rich. Now-a-days we can get answer to any question with the click of a button on iphone or any electronic media. I am pretty sure that the coming generations should be healthier than our fore-fathers but World Health Organization’s (WHO) data points toward a different direction.

According to WHO cardiovascular disease (CVDs) is the number one cause of death globally:

-more people die annually from CVDs than from any other cause.

WHO is suggesting ways to control avoid and reverse these killer diseases. When I found my relatives dying one after the other I decided that I should embark upon to educate people with whatever I have learnt as a student of science, teacher of science at various universities of the world and educator for at least five decades. My globally recognized research publications make me an expert in researching, analyzing and interpreting scientific journals to bring fruitful results in a layman’s language The real education is one that benefits people and THIS BOOK is an attempt in that direction. With the support of my readers worldwide I am quite confident in achieving my goal of seeing A HEALTHY AND HAPPY PEOPLE ALL OVER.THIS BEAUTIFUL GLOBE.

← Let us keep www.life2health.org alive for ever.
You can lose weight by drinking ice water →